Why is night vision green? 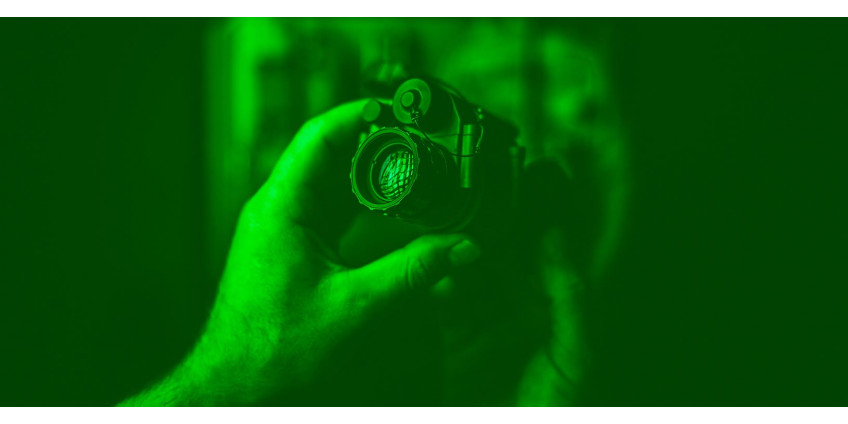 Why is the color green used for night vision? And anyway-what is color? With what can it be compared? After all, there is no example to compare it to! Color is not a property of light. In other words, it is just an impression that an electromagnetic wave of a certain length makes in the brain. Without recording the flashed moment in our memory, we perceive color instantly, the eye-an amazing organ of vision that distinguishes a million colors. And even with such a high-tech organ of touch as the eye, we cannot recognize the same color repeatedly, because we do not have a sample with which to compare the original. So you should know that seeing color is a subjective perception and different people perceive it differently. It is ambiguous and inaccurate. How can you give an objective assessment of the color seen by a person's eye? Practically impossible. Color can be measured! Yes, simply measure and recognize it as a number with the help of an instruments-corimeter and spectrometer.
Moreover, color can be described using a three-coordinate system beyond the hue, lightness, and saturation of the color being measured. The mathematical notation of color was developed and approved by the International Commission on Illumination (CIE) and corresponded to visual perception. Say, the sensitivity to the intensity of the radiation responsible for the appearance of color is brightness. In daylight, it is characterized by the highest value for the yellow-green wavelength of 555 nm and at night-510 nm. For information, 59 percent of the spectrum in white light is green, 30 percent is red, and only 11 percent is blue. So why do we see objects in color? Pencils, rainbows, flowers, sunsets, and sunrises? Thanks to the eyes, or rather their sensitivity to the length of light waves of the corresponding receptors directly responsible for color perception. We see the colors of different objects only because they reflect and absorb the rays falling on them. Objects do not shine with their light. The part of the radiation reflected from the object's surface that reaches our eyes is that particular color that we see. So why is the color green?

Who and when invented the night vision device?

Night vision devices based on EVF appeared in the thirties of the last century. In the USSR, in 1938, prototypes of the BT heavy tank were equipped with infrared headlights, which allowed these vehicles to move and shoot in the dark. In the 1940s, the same USSR developed the night sight for small arms installed on the unfinished and low-grade submachine guns. In the forties of the same century, Germans began to create similar sights, and almost at the same time, their developments were tested in the USA. Progress was moving forward, but all these first-generation sights had an identical drawback. It was very power-hungry. A power supply with a uPVC required a high voltage, which was somehow solved when installing the devices on large equipment without solving the problem of a weak light resolution and low sensitivity.
After that, many new and improved night vision devices were developed and introduced, usually classified by generations. Thus, the zero night vision system designed for the U.S. Army was characterized by the video projector being connected separately to the apparatus. A beam of infrared light, invisible to the naked eye, was projected through the projector to the desired object of observation, reflected from it, and returned to the lens of the night vision device. Developments of this type used an anode and cathode to increase the speed of electrons, which distorted the image and quickly put the expensive electro-optical amplifier out of service. The main disadvantage of this type of UAV was that the enemy was countered with infrared detection equipment, which allowed the coordinates and location of the danger to be determined quickly and with high accuracy. The next generation of the UAV was converted to passive infrared, using moonlight and starlight, which eliminated the problem of the source of the designed infrared light. However, these designs did not work in dense clouds and darkness. A scientific breakthrough is attributed to the second generation development when a microchannel plate was installed in the electron-beam amplifier of the device, which made the device "see" objects in near-total darkness. The third generation of NV units does not differ much from the second generation except for a better quality image. The latest generation NV units work in all types of weather. A probable amplifier with automatic regulation of the photocathode voltage is installed, which allows the device to adjust instantly to any changes in the light. Professional night vision devices for military applications use electro-optical amplifiers MILSPEC and COMSPEC standards.

What about green vision?

So why the color green? Our eyes see green better than any other color at any time of day. However, there has always been a debate about the burden of red or green light on the retina at night. In the last century, a red light was used in the army and military conflicts. It was the traditional color of night lighting, and, unlike conventional white light bulbs, it did not light up the retina during night operations. After all, the brighter the light source, the harder it is on the eyes. With red lighting, fighters needed less time to adapt to the dark. At the same time, scientists have proven that our eyes perceive green light better than red.
Along with the three primary colors, red and blue, green is the color of visible electromagnetic radiation (light) with wavelengths lying in the range of approximately 510-550 nm. Using green illumination in low light conditions, a person can see more than with light sources of another color. In other words, with green backlighting, we have a better visual understanding and the ability to differentiate between colors. This is seen when reading military maps with colored lettering and markings. At the same time, at high brightness levels, the red light source is superior to green, reducing the sensitivity to light, increasing dark eye maladaptation, maintaining night vision when changing light - the transition from light to darkness, and vice versa. This is familiar to scouts and special forces who often use tactical flashlights with interchangeable colors. Hunters also use such illumination. Animals are almost not afraid of it.

To summarize. Fluorescent screens in night vision devices are coated with a composition glowing an excellent green color for easy perception by the human eye. It takes less energy to glow the phosphor with green light than white light, which is very important for night vision operation. When transitioning from complete darkness to the green glow, the eyes are less tired than the white ones. Nevertheless, the only correct solution is to use a light source with a brightness level that suits the situation. It does not matter what color the light is red, green, or blue-green. It is essential that it is not bright and does not glare in the eyes.