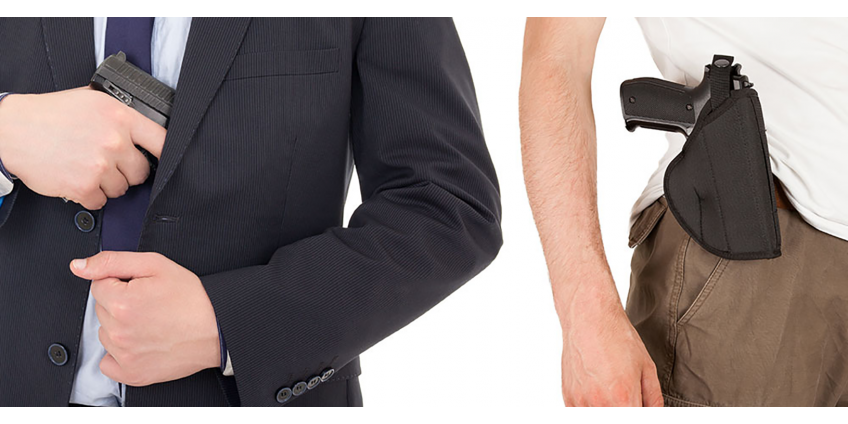 The differences between concealed carry vs. open carry are important for handgun owners to consider when deciding to carry a weapon for self-defense.

Carrying a handgun for self-defense purposes is an increasingly popular idea amongst many people ranging from gun owners to previous victims of violent crimes. The world we live in today seems to get more and more dangerous with every day that passes. All you have to do is turn on the TV news or browse any news website and you will undoubtedly see or read a story about a shooting or other violent crime.

Having the ability and training to defend yourself, and other innocent bystanders, while in public is a privilege that gun owners do not want to give up. Unfortunately, there are many people who are against the idea of not only carrying a weapon for self-defense, but also gun ownership in general. Gun laws allow law-abiding citizens to carry handguns for self-defense regardless of what anti-gun advocates do or say. However, it is important to know the difference between concealed carry vs. open carry so that you may choose the option that is best for you and will allow you to have a handgun on your person for protection.

It is every American’s Constitutional right to openly carry a weapon on their person while in public. That is actually a very popular reason that many gun owners who open carry will give you as to why they prefer to open carry their gun. There are certain states where open carry is against the law or restricted and some other areas require a special license in order to legally open carry. Obviously, your location will determine whether or not open carry is a legitimate option for you or not. However, legality is not the only problem facing gun owners who open carry their sidearm in public.

Many different businesses have asked patrons to not bring their firearms into their stores or restaurants and have taken an anti-gun stance when it comes to the subject. Open carry also means that your handgun or sidearm is in plain sight of anyone you encounter while going about your business. That could potentially lead to people being uncomfortable or even worse in more extreme cases.

Comfort may be another issue that could factor in to your decision to open carry or carry a concealed weapon. It would be more difficult to concealed carry when wearing apparel suited for warm weather. Inner-waistband (IWB) holsters can be bulky for some individuals with a slighter build as well.

Concealed carry does have a lot of advantages to it over open carry. One of the great things about concealed carry is that it requires a license to do in all 50 states. Acquiring that license requires a training course that teaches people how to safely use their firearm and appropriate situations in which to use it. Better training equals more safety and that is something that all gun owners should be advocates of themselves. In states where open carry doesn’t require a license, people with no formal training with firearms would not be breaking any laws by openly carrying their guns.

People in public would also be none the wiser to the fact that you are armed. Privacy is something that a lot of gun owners desire in their choice to arm themselves and avoiding any sort of scene caused by anti-gun individuals who spot a person openly carrying is ideal to the vast majority of them as well.

Open carrying will generally lead to more encounters with law enforcement. Even when open carry is done legally, that does not stop an easily startled or uneducated citizen from calling the police and reporting a person with a gun. That sort of hassle is something that most gun owners would prefer to avoid. That is nothing against law enforcement at all. They would simply be doing their job in responding to such a call, but causing that kind of disturbance in what is really a waste of the police officer’s time is better when avoided.

There is also a tactical disadvantage to open carry. It would be much easier for someone, whether it be a criminal, attacker, or other random person, to make a grab for your sidearm when it is plainly sitting on your hip. That is not to say they would be successful especially if you have a holster that is more than just single retention, but that sort of tactical disadvantage should really be avoided at all costs.

The bottom line in the concealed carry vs. open carry debate is that in most circumstances, concealed carry is the preferred method. There really isn’t a lot of positives that are gained by open carry. Sure, it doesn’t require a license in the majority of states and it might be a little more comfortable, but it also seems that most gun owners who open carry are trying to prove a point that doesn’t need to be proved.

Yes, bearing arms and the act of open carry are your Constitutional rights, but there is a point where only doing it for that specific reason becomes unnecessary. Avoiding conflict should be the goal of not only every gun owner, but every single person in general. That is much more easily done via the act of concealed carry and that is something that everyone considering the thought of arming themselves for self-defense purposes should think about when making their final decision.

Brian Belko is a freelance writer and blogger. His primary areas of focus include sports, the outdoors, technology and human interest, but he is proficient and comfortable covering a wide range of topics. In addition to his freelance work, Brian also writes for Wide Open Spaces and is on the Pro Staff at Military Hunting and Fishing. When he isn’t busy writing, Brian enjoys fishing farm ponds for bass and hitting the spring woods during turkey season.