What Molon Labe Means to the Gun Community 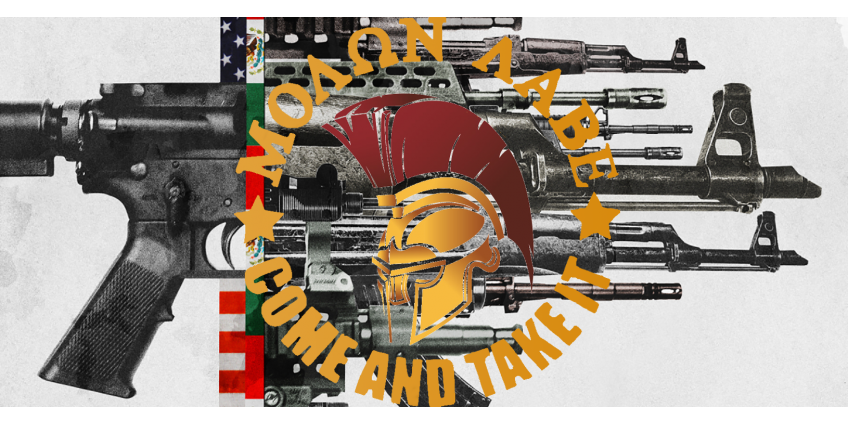 As a weapon, words will bind, sunder and divide. They last longer than steel and are carried as much within minds as they are within hearts, which is why the phrase “Molon Labe” has echoed for more than a thousand years from the blood-soaked walls of Thermopylae to scorched trenches and battlefields.

King Leonidas I famously uttered “Molon Labe” (ΜΟΛΩΝ ΛΑΒΕ or μολων λαβε) in response to an ambassador representing King Xerxes I, commanding the Spartan army to “hand over your arms.”

What Leonidas said was Greek for “come and take them.”

Xerxes, the Persian king, had initially offered the Greeks freedom and the opportunity for wealth when Persian forces took command over the region. With that denied, the Persian ambassador was sent to demand they lay down arms and the Spartan denial was delivered.

The significance of this phrase is bolstered by the fact that only 300 Spartan Hoplites stood with shield and spear in defiance to Persian forces. Historical records from Herodotus claim Xerxes’ army totaled 2.6 million.

Importantly, Leonidas’ Spartan forces were also joined at the Battle of Thermopylae by 3,000 Peloponnesians, 1,000 Lacedaemonians, as well as over 3,000 Locrians, Malians, Phocians, Thespians and Thebans, according to Diodorus Siculus.

Spartan forces put that name to the test, staggering Xerxes and sending a shockwave through enemy forces

Greek forces survived for three days until their numbers dwindled upon a hill and “in that place they defended themselves with swords, if they still had them, and with hands and teeth,” according to Herodotus.

A monument of King Leonidas stands at the site of the battle, and a sign under it states the Greek phrase for “Come and Take Them!” — A testament to the brave king that defied giving up his weapons to a man who thought himself an adversary to Gods.

Modern interpretation of Molon Labe as a cultural marker

Allen West, a retired Army Lieutenant Colonel who was later elected to the U.S. House of Representatives for a time, recited the story behind Molon Labe to a gathering in Florida, and asked the group what their version of Thermopylae is and where would they take their stand.

It’s been recited by defiant soldiers in trenches, reflected on NRA products and resounded throughout speeches. It’s a defiant demand underpinned with tones of courage, bravery, pride and honor that elicit a powerful emotional response from and within those who say it.

For the gun-rights community, it’s a direct, defiant response to gun-control legislation.

Molon Labe represents a type of terse, austere statement called a “laconic phrase,” named after Laconia, the Greek region where Sparta was located. The soldiers were known for minimalistic, militant simplicity, and their language mirrored this.

An example of this: Philip II of Macedon invaded southern Greece and sent a message to Sparta. It apparently read, “You are advised to submit without further delay, for if I bring my army into your land, I will destroy your farms, slay your people, and raze your city.”

To which, Spartan leaders replied, “If.”

And for those who remember what happened in the movie 300, Dienekes was told of volleys of Persian arrows blotting out the sun. He said, “So much the better, we’ll fight in the shade.”

Molon Labe is a manifestation of the operating intent behind “come and get them,” meaning gun owners as a community are actively, legally working to maintain the right guaranteed by the Second Amendment and exercising it freely at the state level.

Molon Labe is in headlines. Molon Labe is in actions. It’s in opposing and promoting certain legislative actions and committees, as well as understanding what laws are being presented.

This section of Defend and Carry will regularly act as a watchdog to analyze and bring awareness to how gun legislation is being pushed, acted against or otherwise presented to the public.