Night Vision vs. Thermal Optics: What You Need to Know 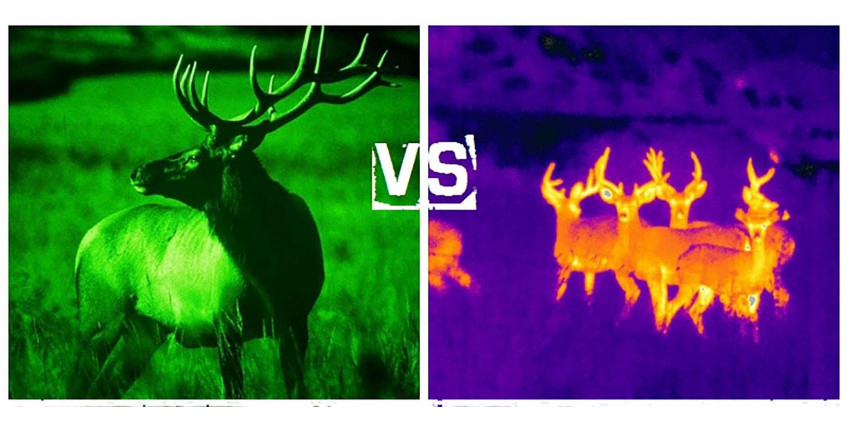 The human eye sees the light which is reflecting from the objects. The more light, the better we see objects at a different distance from us. Therefore, in dark or low light conditions, we see very bad. Night vision devices are working according to the same principle as the eye – they capture light reflected from objects and turn it into a visible image. Thermal optics works on a different principle – it captures the heat that radiates from almost any object. Let's compare night vision and thermal imaging.

Many people are interested in the question of how does thermal imaging work. Thermal optics is also called thermal sensors. Unlike NV, it does not depend on the light and needn’t any illumination to find an object. Thermal imagers capture the heat generated by almost any object. The most powerful heat sources are people, animals, and vehicles. But unlived objects can generate the heat too – ground, stones, trees. In the second case, the heat stream will be much weaker, you will see just a pale silhouette.

Night vision devices need illumination to work. The less light, the worse the picture will be. In conditions of poor visibility or complete darkness, infrared illumination is used. Infrared light is not visible to the naked eye, but NV devices can see it.

These accessories should only be used at night or dusk because daylight can damage their lenses. NV optics does not react to heat or movement, so it can be used to detect unlived or cold objects. Unlike thermal imagers, which do not work well in cold weather, NV optics works at any temperature range.

Thermal imagers provide a thermal picture of the surrounding area. On standard models, the displayed image is colored in different shades of grey. The lighter the grey, the warmer the object is. And vice versa, the coldest places of the object are painted in dark shades. If there is no heat source around, the display will be fully grey. But it is not very convenient if you need to go through a forest or a high grass at night. Modern models of thermal imagers display objects in different colors. The warmer the object, the brighter the color will be. More about the advantages of thermal optics:

·         Catches heat sources at a great distance, so it will show all objects in the selected territory, regardless of their distance.

·         Sees objects in conditions of fog or smog. It can also show objects that are hidden behind the thin walls, doors, or in the foliage of trees. Objects behind stones, tree crowns, and other dense materials cannot be found by the thermal imagers.

Thermal optics is often used by hunters and wildlife watchers. But it has found wide application in other spheres of our life: during fire and disasters, it can be used to find people or animals, police can see criminals through the door when protecting large objects, such devices can find criminals who want to illegally enter the territory, etc.

Night vision devices are not as perfect and versatile as thermal optics, but they also have their advantages. Modern models can show a clear and bright image in the absence of light sources. For many devices, it will be enough light from the moon or stars to provide a good image. An infrared beam is used as a backlight, and it cannot be seen by humans or animals. Such devices show completely all objects that are in their field of vision.

Unlike thermal optics, the NV devices work at low and high temperatures. Therefore, they are more preferable for winter hunting or observing the animals of the northern regions. The military also uses these devices for their operations during the cold season. Advantages of NV devices:

·         Shows a fine-clear picture of objects and territory in conditions of dusk or darkness. You can easily cross the night forest or field with any of such devices.

·         New models of NV transmit a clear picture across the entire display area, without dark or blurred frames on the edges.

NV devices are chosen by those who like to hunt at night because there is no need to look for a target. It is enough to choose a location and wait until the target appears in your field of vision. A big plus of such accessories is that you can use optical magnification, which is not available in thermal optics. NV sights are compatible with hunting rifles (https://www.defendandcarry.com/night-vision/night-vision-weapon-sights), they can be easily attached or removed if needed.

Durability of the scopes

This criterion is probably of big interest to everyone who chooses between Night Vision and Thermal Imaging. In practice, it turned out that both options are very practical and durable. This is achieved through a complex assembly process of such accessories. All the important elements in the structure of the device have been assembled by hand. When assembled the full vacuum must be created inside the tube with lenses. The body of the tube is made of aluminum or chrome. Besides, a low-melting metal is used, when heated it reliably connects all structural elements.

The optics have to pass the quality and endurance control. Depending on the model and destination, it is tested for shock and vibration resistance, and military optics are tested for resistance to heat and humidity. Therefore, any NV or thermal device is designed to be in active daily use. But it is worth remembering that all optics likes careful handling and proper storage.

Thermal optics is more expensive than night vision devices. But the price does not depend on the brand of the accessory, but rather on its functionality. The thermal imager provides the ability to see warm objects at any time of the day, in poor visibility conditions and even through thin obstacles. NV provides the detection of all objects that are in the distance of visibility. With such accessories, you will have the ability to navigate in darkness and hunt in the cold season.

Thermal devices are considered to be the new generation inventions, so they are a class higher than NV. But when choosing, you should be guided not by new products on the market, but by the purpose for which you buy optics.