Night vision for a helicopter 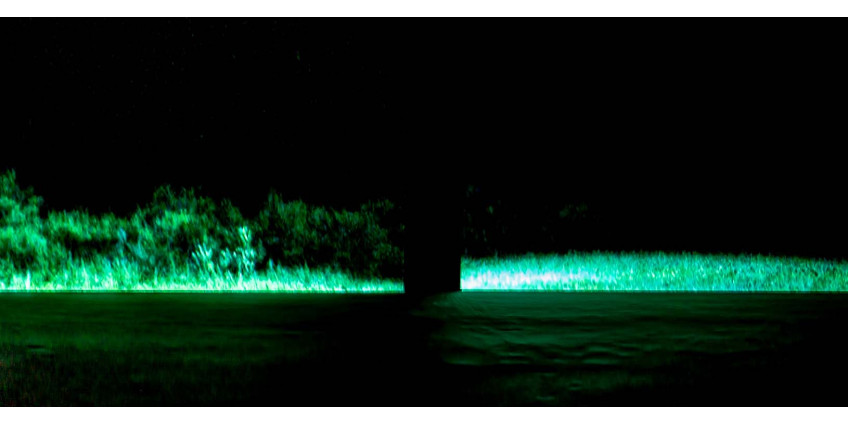 What is night vision?

Night vision is a technology that captures electromagnetic energy and converts it into an eye-visible image. On the outer side of any night vision device, there are lenses. They capture the visible particles of light, that is, the photons. Then the photons are directed to the electronic part, which is called a photocathode. Here they get an eclectic charge and turn into electrons. The electrons enter the image intensifier chamber, where they meet the microchannel plate. The plate has a lot of tiny micro-holes on the surface. All of them are symmetrically from each other and have the same diameter. Microchannel plate increases the number of electrons by several hundred times.

After the image intensifier tube, an avalanche of electrons hits the phosphor screen. At the point of contact of the electron with the screen appears a flash of energy. In this way, electrons pass the piece of the future image (particle of captured light). The phosphor screen creates the full image and sends it to the user's screen. Depending on the type of phosphor screen coating, the image in the eyepiece can be green or yellow, but green is used more often because it is more pleasing to our eyes.

Night vision technology cannot work in the absence of light, or vice versa, in excessive lighting conditions. But the latest generation models are capable of producing a clear image in complete darkness, and they are also not afraid of flare in cases when the light of lanterns or lamps enters the objectives. Night vision generation 3 equipment can improve image clarity by 35,000 times, but the US military mainly uses such models.

Usage of a night vision in aviation

With the development of night vision technology, the possibilities of its use have become much wider. Therefore, it is not surprising that a whole range of night vision devices is used for air vehicle equipment, called Night Vision Imaging Systems (NVIS).

NVIS is installing on vehicles to enhance the pilot's safety during the flight, giving him the ability to have a better night view of the terrain. But at the same time, NVIS will help control a helicopter or land a vehicle if avionics failure, navigation system failure, breaks, etc. In essence, NVIS is a pilot's life insurance system in difficult conditions.

NVIS includes all the elements necessary for a safe flight at night – autonomic night vision devices for the pilot, an infrared flashlight installed on air vehicles, and other components designed by night vision manufacturers for a specific type of helicopter. This system is used in military and civil aviation for conducting tactical operations and medical rescue missions.

In the United States, the largest users of night vision helicopters are considered to be the Helicopter Emergency Rescue Services (HEMS) and law enforcement. But this technology has other users too. Increasingly, NVIS is used by firefighter services, as well as crop spreaders. In the second case, night flight opportunities significantly help save time for spraying the area and materials because there is almost no wind at night, so the sprayed substance will be applied better.

Why night vision is important for aviation

Most accidents in-flight occur with helicopters. It happens so because helicopters are used for short missions and fly quite low above the ground. In the daytime, the visibility behind the windshield is good, and the pilot can clearly determine the distance to the ground and see possible obstacles. But with the onset of dusk or darkness, the pilot's visual capabilities are noticeably lower. He can only rely on avionics, which in most cases cannot fairly accurately “see” the situation around. As a result, helicopter pilots do not always have time to react to tall trees, telephone lines, and electricity pylons.

NV systems help not only during the flight but also landing or takeoff, especially in unknown terrain. This is critical because the helicopter landing surface and the conditions around do not always allow the vehicle to be freely manipulated. Another problem is blind spots, which are quite natural for the human eye in poor visibility conditions. With modern night vision devices, the risk of such zones is minimal, and although the pilot's viewing angle is narrowed, he could clearly see everything that happens in the field of view of NVIS lenses.

Night vision for a helicopter pilot

In the United States, there is an informal rule that only one pilot must know how to use NVIS. In other countries, two pilots in the cockpit must know how to use NVIS. The other members of the crew have to use night vision goggles. In the case of HERS, this is a pilot, a nurse, and a paramedic. In law enforcement, it is a pilot and a tactical officer who will work with maps and terrain and connect with the ground headquarter.

Goggles have been chosen as a mobile night vision device, and this is not a random choice. This accessory is hands-free and does not need to adjust periodically. The goggles can be helmet-mounted or head-mounted and are suitable for long-wearing. Some pilots get so used to such equipment that it is difficult for them to return to piloting at night without goggles. Is it legal to own night vision goggles? Not only the governmental services can have it, but any person. The main thing is not to take them out to another country.

On the United States territory, there is a special protocol that must be taken into account when preparing a helicopter for night flights with the NVIS. In particular, the cockpit of the aircraft must be redone. In new helicopter models, special equipment is installed immediately during assembly, and older models are modified.

The pilot and crew members who will fly helicopters with NVIS must undergo special training. For this, In-flight schools are now working simulators. The main accent is made precisely on night vision devices and NVIS technology. Interesting that the theoretical part can only be taught by a pilot who has experience in night vision. Officers with extensive military experience will not be able to conduct training if they do not have the skills to work with NV.

Night vision is at a quite great stage of development, but still, people have not fully opened its potential and application possibilities. In civil aviation, its use is only gaining momentum, so it is likely that soon pilots will use high-detail color night vision.