How to hunt a mouflon 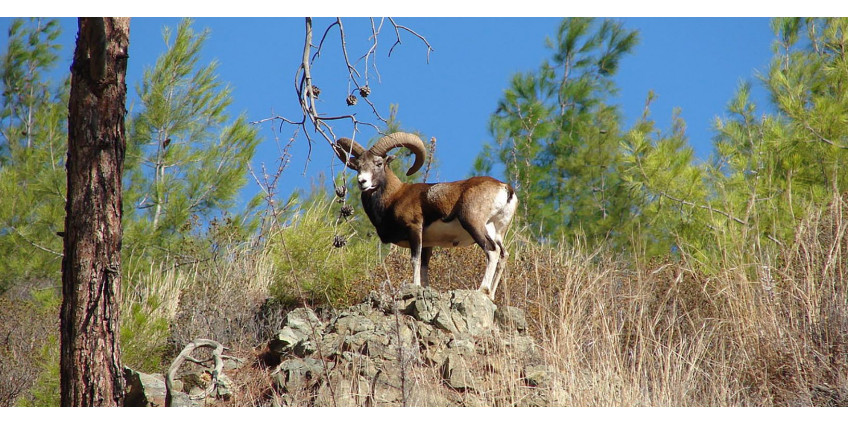 There are four varieties of mouflon scattered worldwide, which do not differ much from their brethren's behavior. The hump-nosed head, short tail, small mane on the neck, dark brown or reddish-brown color on the sides and light spots on the back, the males have heavy, spiral-shaped large horns - this is all about Ovis musimon, the mountain sheep of the semi-horn family, the European mouflon. In recent years, the mouflon has acclimatized in several mountainous countries of Europe. It was brought from places of its permanent habitat - Corsica, Sardinia, Asia Minor, Iran, Afghanistan, Pakistan, and northwest India. For comfortable habitation in summer, mouflon chooses hilly places with open slopes, avoiding steep precipices and gorges. Its diet differs little from that of ordinary sheep. These are cereals, trees' fruits and bushes' branches, and mixed grasses. The stable and regular life of this animal directly depends on the presence of a source of water nearby. And mouflon is one of few animals able to drink salty water.
In natural conditions, mouflons live up to fifteen years. It is said that the mouflon's longevity is due to its heavy horns that contain bone marrow-producing blood cells. They supply the body with oxygen, which helps the mouflon survive in the mountains with thin air. The higher the elevation, the heavier the horns must be.

What do I need to hunt a mouflon?

Preparing to hunt, a mouflon hunter should know some facts that will help him understand the animal's habits. First, it belongs to the clan of cloven-hoofed ruminants and, more specifically, to the genus of rams with the International protection status "on the verge of extinction." The weight of males can exceed fifty kilograms, considering the large, heavy, twisted horns in a ring. Secondly, from spring to autumn, mouflons live near a water source, feed all night until late morning, and tend to herd, and males remain separate from the herd and mingle with it only during mating. During hot periods mouflons may not leave a shaded area for several days.
Mouflons lead a sedentary lifestyle in a selected area. They pass the same trails-routes. On hot days, rams rest in deep rookeries in permanent places, in the shade of trees and gorges.
Thirdly, mouflon hunting is allowed in the open fields from early August to mid-January. A mouflon runs away easily and quickly, effortlessly dashing over huge stones and bushes. It is not a problem to jump a two-meter obstacle or dive from a height of ten meters. And do not forget that mouflon senses are well developed, and any, even soft sound is perceived as a potential danger.

A brief guide to mouflon hunting.

The mouflon is hunted mainly with rifled weapons. The animal's coloring and its ability to move unnoticed on mountain slopes make hunting difficult. Hunters sometimes use hot afternoons when animals rest under the shade of large rocks. Hunters pass from above to leeward on ledges of rocks at a shot's distance and shoot at the target using large buckshot. Remember to shoot the mouflon only in front of you, along the slope at an angle. One should strictly follow the rules of hunting and shoot with the hunting gun only when the hunter identifies the game and makes sure that his shot will not harm other people's health and will not damage their property.
Considering the complexity of mountain sheep hunting, ambush hunting, driven hunting, and scavenger hunting can bring results less often. When hunting from an ambush, you should previously determine the place of the rest of the animals, the pass to pastures and watering holes, the time of animals' passage, and places where you can arrange an ambush. On the other hand, such hunting turns out to be ineffective, as a mouflon rarely passes twice by the same route. And here, the result depends more on luck. Even if the target appears, it will be necessary to shoot from a considerable distance, which is impossible without an excellent long-range gun with a powerful telescopic sight. In addition, given the particular caution of the mouflon, they are unlikely to let you get close to them and put them in the eyes. At the same time, the favorite type of hunting is driven hunting. Some hunters line up in a particular order with a division of functions in this hunt. The corral hunters go the animals to the line of fire, where there are shooters with the task of marksmanship on the animals allowed to shoot. Sometimes, in the corral scheme or the rounds, they introduce the so-called "muteurs" placed on the sides of the corral with the only task - to let the animal get out of the corral and direct their movement to the shooters. When hunting with a scramble, it is understood that the mouflon has an excellent ear and hears the hunter in calm weather at a distance of 300 meters. Sometimes, to improve results in difficult mountain conditions, two types of hunting simultaneously - signed hunting and a scramble. A group of two or four hunters should trail a herd of animals and, having risen to the place, comb the mountain massif from opposite sides, going towards each other to a location agreed in advance. One of the parties eventually reaches the animal. Such a method requires a highly coordinated team of hunters.
A mouflon is always a plentiful prey and a dream of every hunter. This is both tasty meat, hide, and heavy twisted horns, by the annual rings of which the animal's age is usually determined. It is a trophy, which is considered a credit to the one who made the first accurate shot at the game, even if he did not kill the animal but only wounded it.

One last thing. After winning the battle with the animal and getting the trophy, remember, you can't put your feet on the animal, sit on it or take pictures and selfies in such poses. The animal is worthy of respect. Even when defeated.