Gun of the Week - Beretta M9 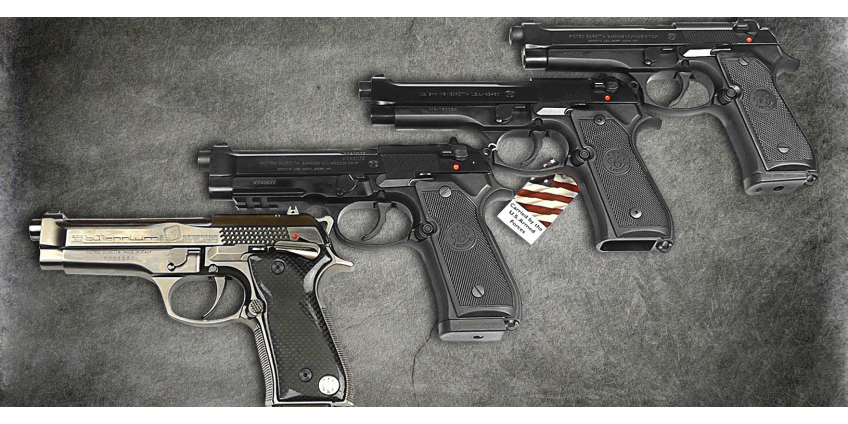 Few handguns are as culturally synonymous as the Beretta M9 from the Model 92 series.

Nine years prior to being adopted by the U.S. military, the Beretta Model 92 was birthed from aluminum and Italian grit — with its design team headed by Giusseppe Mazzetti and Vittorio Valle, whom both answered to Carlo Beretta.

The project to make Beretta’s first double-action 9mm with the company’s first double-stack pistol magazine began in 1970, with prototypes prepared by 1975, but its functionality and design can be traced to prior handguns.

It became a widely adopted handgun in law enforcement agencies and military bodies, with clones made in bulk.

Progression, Prior Generations and Success of the Beretta Model 92

The Beretta Model 92, chambered in 9mm Parabellum, was introduced in 1975. It had an aluminum alloy frame, open slide design, staggered magazine and a double-action trigger. Its magazine release harkened back to the Beretta M1951.

Its frame-mounted safety was the same as a 1911 or Browning, according The Gun Digest Book of Beretta Pistols by Massad Ayoob.

Two years later, the Model 92S was updated and adopted by the Italian State Police — it had a hammer drop safety that rotated the firing pin away from the hammer’s action.

In the late ’70s Beretta won a contract to equip the Brazilian military with its Model 92, with the facilities later being sold to Forjas Taurus, which introduced the PT92 clone of the Model 92.

In 1978 the U.S. Government’s Joint Service Small Arms Program tasked the U.S. Air Force with a series of tests on 9mm pistols to replace the Colt 1911 .45.

This was a contract with about a half a million handguns on the line. Beretta submitted the Model 92S-1 for testing, an update from the 92S that had a reversible magazine release in the trigger guard, an ambidextrous safety lever, grooved frame and larger sights.

It outperformed the Colt SSP (stainless steel), Smith & Wesson 459, FN DA, FN FA, FN High Power, Star M28, Heckler & Koch P 95 and VP 70, according to reports. The Beretta Model 92SB was an updated version introduced in 1980 that had checkered grips, reshaped safety levers, an overtravel shelf on the trigger and a firing pin lock, according to Gene Gangarosa, Jr a prominent handgun authority.

Further tests updated the previous model to the Model 92SB-F, which was evaluated in 1984 and adopted in 1985 as the M9. Around that time, the Model 98F was made for the Italian market.

At the same time, the M9 was introduced to commercial use and police forces as the Model 92F, with a few changes like a squared trigger guard, chrome-lined bore and a fourth-finger rest on the magazine.

The Model 92F was updated to the 92FS because of a 1989 U.S. Army contract, with certain modifications ordered by the military force, namely the Forged Slide (hence FS moniker).

According to Beretta’s timeline, the 92 pistol series would be adopted by 25 U.S. State Police agencies and the U.S. Navy, Army, Marines and Border Patrol.

In 2010, the Model 92A1 and 96A1 in 9mm and .40 S&W were added to the 92FS series, integrating features from the 90-Two: higher capacity magazines, a removable front sight, an accessory rail, a captive recoil spring assembly, a rounded trigger guard and a frame recoil buffer.

There have been several variations and models of the M9 and Model 92 series since its proliferation more than 40 years ago.

What does the current model have to offer?

The Form Factor and Specs of the Beretta M9

The Beretta M9 has a single action double action trigger, which will require a longer pull on the first round to cock the hammer, whereas the second and subsequent shots will have a lighter pull because hammer has been cycled, requiring the decocker to be engaged when returning the handgun to the holster to return it to double action.

According to Beretta, it complies with government testing guidelines by firing 10-shot groups of 3 inches or less at 55 yards, out-of-box.

It’s southpaw-friendly with a reversible magazine release and an ambidextrous safety-decocker.

Well, depends on who’s asked that. There is concern about the safety mounted on the slide, and the 92FS is a living design with consistent updates while the M9 has a stagnant design.

All in all, it served the U.S. Military for decades. However, the Sig Sauer P320 recently replaced the U.S. Army’s Cold War-era M9 service pistol in a $580 million contract.