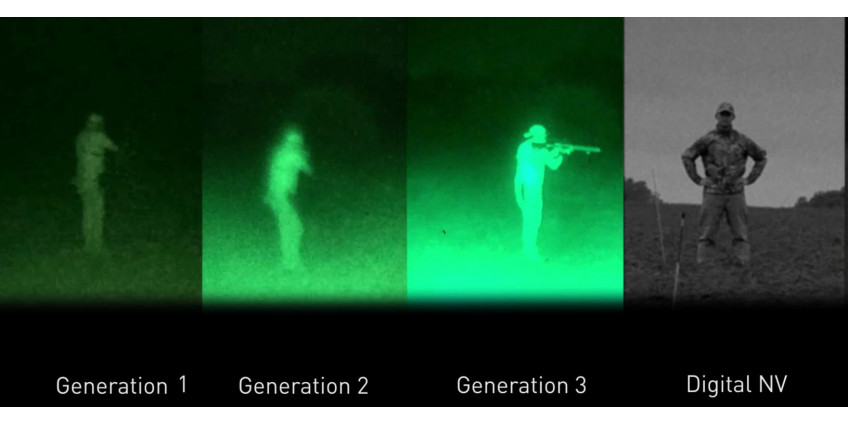 When you come to a decision of obtaining your own pair of night vision goggles, you would certainly face the fact that there are various types of goggles available on the market, varying significantly in price and characteristics. And the first thing you would definitely come across is that the main difference lies in the generation of the device.

So let us study the basic traits of each of the four generations of night vision goggles.

What is the difference in the generations of night vision?

As the scientific progress continues, new and new methods and technologies are invented and coming into use, night vision technologies being no exception. The principal difference is in the type of the Image Intensifier Tube and its ability to enhance the minor portions of light available at night.

The first goggles to appear were not extremely perfect at intensifying the incoming light if you compare them with the later generations of goggles now available in the market. They were just a minor improvement from the original Generation 0 night vision devices which had come into military use not long before the Second World War. Thus, Generation 1 devices, developed in the 1960s, have a rather simple design.

The light photons, entering the device, go through a magnifying lens and come on a photocathode which, in its turn, emits electrons. These excited electrons come into contact with an image intensifier tube, then strike the phosphor-covered screen which starts emitting photons in much greater numbers if compared with the original amount which entered the goggles. This provides light enhancement to approximately 1000 times. However, these goggles are rather bulky and can work properly only if a good amount of moonlight is available. Otherwise, an artificial near-infrared light source is required for their proper operation, which is definitely a disadvantage, as it may help to reveal the observer to those people or animals who are capable to see in the near-IR-spectrum.

Moreover, inconveniently, the range of characteristics of generation 1 goggles may vary enormously from one manufacturer to another worldwide, so please read the device characteristics carefully before obtaining it to be sure it will suit all the needs you expect to be covered.

Talking of the quality of the out-coming image, you also should not expect too much: most probably, the transferred picture will be a bit deteriorated with dark dots caused by the so-called electron-noise.

Besides, generation 1 photocathode is rather short-living, compared with later generations, and usually provides no more than 1,000 hours of life time. The device is also rather vulnerable to bright light.

Nevertheless, generation 1 goggles are comparatively inexpensive and are more than suitable for the majority of amateurs who just want to gain a certain night vision experience. So they are quite fine for camping excursions or watching some fauna at night.

Generation 2 goggles are an obvious improvement in technology, design, characteristics and life time.

They produce a much brighter and clearer picture as their design features a micro-channel plate which additionally serves to multiply the number of excited electrons. Thus, the resulting output light is enhanced up to 20,000 times.

The photocathode in Generation 2 goggles has also been significantly improved. The S-20 covering substance has been changed for more sensitive S-25 substance, giving a greater amount of excited electrons at a start.

All these improvements provide much brighter illumination and are capable of producing a good picture even on moonless nights without the need to switch on an infrared light source to enhance the viewed image.

The resolution and image reliability have also been enhanced due to the improved signal-to-noise ratio.

As for the life-expectancy, the Generation 2 goggles can assure you from 2,500 hours to 5,000 hours of operation.

However, again there is a great range of Generation 2 goggles available on the world's market, different manufacturers giving their own classification. So be cautious and ready to go into details.

Especially taking into consideration the fact that they are more expensive than Generation 1 goggles.

Generation 3 goggles came into use in the 1990s and are now considered to be the best option regarding its resolution and applicability characteristics.

Structurally, generation 3 devices are almost the same a those belonging to Generation 2. The difference lies in the more improved gallium arsenide photocathode coating and the enhanced ion-barrier film, covering the multi-channel plate. The former is responsible for higher light sensitivity, while the latter provides better noise protection, thus making the image sharper. Additionally, this ion barrier considerably increases the life-time of the device up to 10,000 hours of operation.

The compatibility of the device has also been significantly improved.

Nowadays, these goggles are widely used by law enforcement and for military structures. But they are definitely more expensive than devices of the previous generations.

But again, Generation 3 goggles' specifications may vary considerably from one manufacturer to another.

Another improvement of the device appeared in the 2000s when the auto-gating technology came into application.

Widely known as Generation 4 among civil consumers, and as improved Generation 3 autogated devices among US military personnel, these goggles are capable of rapid adjustments to quick changes of ambient light conditions. It has become possible due to the automatic system of powering the photocathode.

The removing of the ion-barrier film also has improved the distance range and the resolution.

One of the latest technologies which has come available on the night vision devices' market is the use of the P45 white phosphor instead of P43 phosphor in the image intensifier tubes.
The result is a black and white - or rather various shades of grey - image on the output.
Traditionally, the green phosphor has been used most frequently in the night vision devices, as it was found that the human eye is more sensitive to the green color.

However, now, with Generation 3 devices providing a very high resolution at significant distances, the application of white phosphor has become possible.

The focus groups, involved in testing, actually provide controversial opinions. Some people claim that their eyes adapt to night vision and back to normal daytime vision easier with green-colored images, while the others believe that the black and white picture is more common to the human eye, because it is similar to the perception of the ambient environment in moonlight.

As the cost of both technologies is almost the same, the choice seems to depend purely on the models available on the world's market and personal preferences.